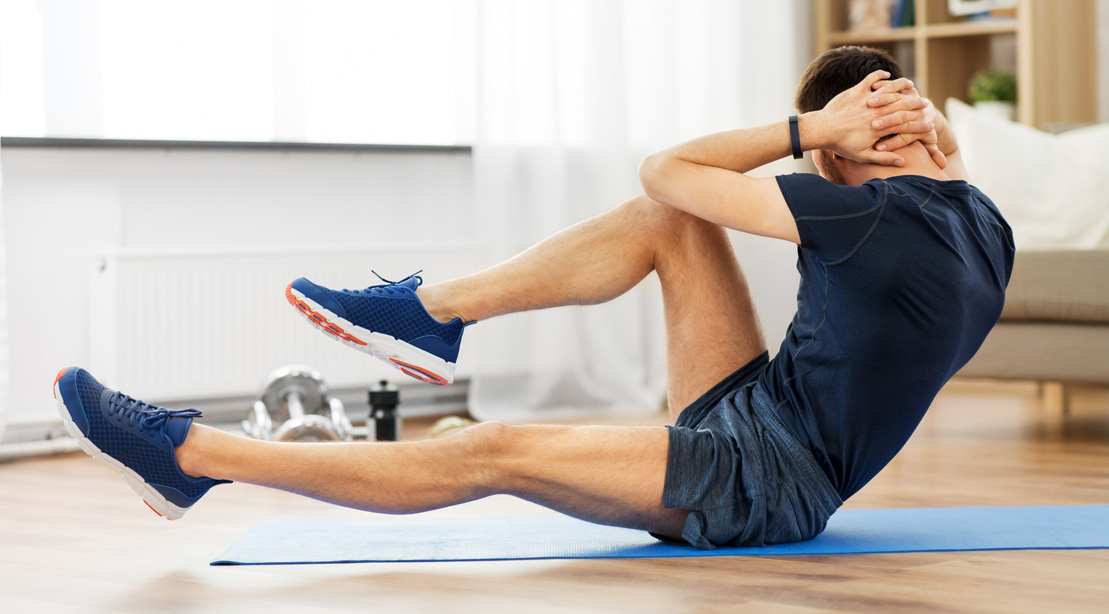 If you want to build a sexy six-pack in the least amount of time, say goodbye to stomach crunches; stomach crunches are not the best exercise for six-pack abs. Sounds crazy, right? After all, crunches and sit-ups are supposedly the end-all, be-all exercise for abdominal training. But that’s not necessarily the truth, as several activities will get you better six-pack results in less time and with less effort than crunches. But instead of bombarding you with a whole handful of movements that will give you better results (yes, crunches aren’t even in the “top 10 exercises for six-pack abs”), I’m going to cut to the chase and leave you with the best exercise for chiseling a six-pack stomach in the least amount of time possible.

Are you ready? Good…

That’s not a typo. Squats are your best option for building a six-pack stomach. Sound crazy? Of course, it does. Squats are supposed to be leg exercises. Right. And that’s precisely why they’re so good at defining the midsection.

This is true for men and women.

Why Squats Are The Best Exercise For Six-Pack Abs

As you may or may not know, what hides your abdominals isn’t a lack of muscle; it’s a build-up of body fat. Your body’s natural tendency is to store fat right in your stomach. It doesn’t always mean you’re out of shape or fat; it’s the body’s biological, genetic programming. You’ll need to chisel away at that fat storage to show off your abs.

But there’s one problem: It’s impossible to “spot reduce” or “lose weight in one spot.” Worse, your body will probably give up its fat stores everywhere before letting go of that nasty belly flab. Is it fair? No? But it’s a fact of life (and physiology).

You already have abs. Seriously. They are there (probably hidden from view, but they’re there, trust me). Unlike most other muscles in your body, your abs are always working. Even if you sit on your duff all day watching TV and drinking beer, your abs are constantly firing. They help keep you balanced when you stand or sit and are responsible for twisting from side to side and bending forward. Even if your biceps look like Olive Oil’s and your chest rivals that of Don Knotts, your abs are there.

What does it have to do with squats?

For starters, they use the enormous muscles of your legs, which are much larger than any other muscle in your body. This is important for two primary reasons:

Plus, you’re working the enormous muscles of the thighs (quadriceps), hamstrings, hips, glutes, and calves mean that you’ll ramp your metabolism up like crazy. And it will stay high for a long time – sometimes hours after your workout. That means you’ll burn more calories when you return to the couch.

Squats are the ultimate compound lift. What’s a “compound lift?” A compound lift is any movement that works more than one muscle simultaneously. Squats work all the muscles of your legs, the stabilizing muscles of your core, and even many of the muscles in your upper body. Some people have even said Squats are the closest thing to a full-body exercise you’ll ever find. Hopefully, your wheels are turning as you read this because I’d hate for you to miss the “core” part. This means that your abs are working in squats!

In comparison, crunches are considered an “isolation lift,” meaning they only work one muscle group: The abs. The abs aren’t huge compared to your legs (let alone your whole body). So by working them, you’ll strengthen your six-pack core, but the likelihood of ever shedding that fat layer that keeps them hidden is very low.

One former NFL quarterback – I can’t remember who, I believe it was Vinny Testaverde, but don’t quote me on it – once said that if you train your lower body, your upper body will follow. So this mystery quarterback focused his strength and condition workouts on his legs and lower body rather than the other way around. And the results? Well, he was an NFL quarterback – that says it all.

When performed correctly, squats are just as safe as any other exercise. When performed incorrectly, you do have a very high risk of injury. That’s why it’s essential to have a professional “check you off” on your squat motions before you start going hog-wild on the weights. And when I say “professional,” I mean it – find a certified trainer or licensed strength and conditioning coach, not a buddy or a fellow gym patron. While they always mean well, nothing says they perform the exercise correctly. I’ve found that the biggest guys in the weight room typically have the worst squat form, but that’s a topic for another article.

The fitness industry went through an odd phase a couple of years back in which it ostracized squats as dangerous and harmful on your knees. Thankfully they’ve reconsidered that fad. This became a hot topic because the industry had to support all those complicated fitness machines (which paid big advertising dollars) – and the idea of a simple squat rack, a barbell, and some weight plates wasn’t as profitable. Again, I’m ranting; I’ll leave it at that.

The point is this: When done correctly, squats are not only safe, but they’re your fast-track ticket to six-pack abs.

Why Crunches Aren’t The Best Exercise For Six-Pack Abs

Okay, so I’ve gone on and on about squats, but I still need to address the topic that lured you to this article in the first place: Why crunches aren’t the best exercise for six-pack abs.

I wouldn’t want to leave anyone hanging, and if you’ve made it this far into this article, you certainly deserve a thorough discussion of the limitations of crunches as they relate to building a hard stomach. And while I could say: “Squats are the best, crunches are not squats. Therefore, crunches aren’t the best,” that wouldn’t cut the mustard.

Let’s break this down:

Now that you know why crunches aren’t the best exercise for six-pack abs go out there and start developing your sexy midsection!

How to Lose Weight Fast on a Plant Based Diet